Tthe FUT Store is not working thanks to high-usage just an hour before the FIFA 15 TOTY forwards were revealed on Jan 16. According to the news broke within the last 30 minutes on EA Sports official Twitter page, the FIFA 15 FUT Store was not working and connectivity issues will vary for gamers today.

Seen from the exact quote within the EA Sports FIFA tweet below, It’s not clear if the FIFA 15 FUT Store going down was related to TOTY forwards being announced, or just similar timing. High-usage no doubt explains the problem is due to extra players online, or maybe even a DDOS attack, although the reason remains to be confirmed. 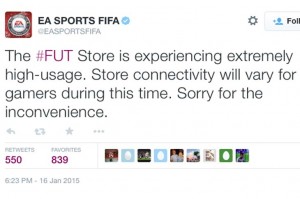