At the start of the May, Runescape announced that the Community Team would be in-game stamping your RuneScape Road Trip journals, to help you get ahead of the game during this busy time of the year. 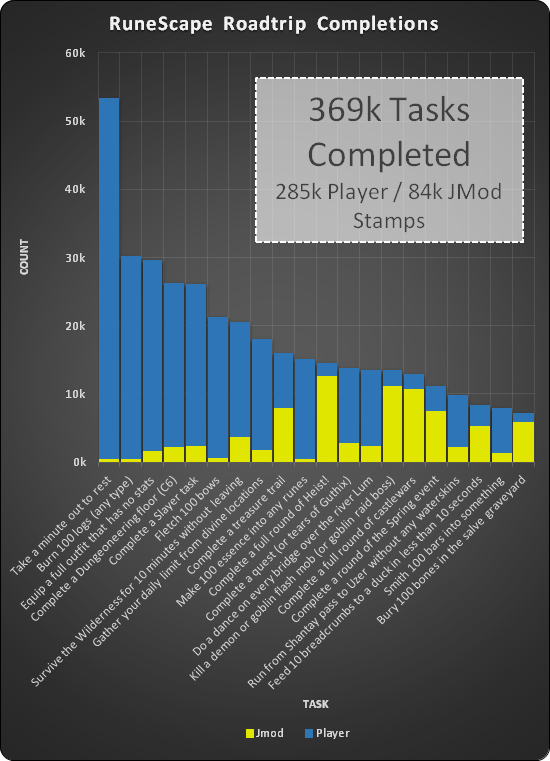 Runescape Team’re sorry you had to wait around longer than necessary, and Runescape Team’ve taken steps to make improvements for the rest of the Roadtrip event in May. This is why – based on your feedback and our own internal discussions – Runescape Team’ve added a new feature to our JMod stamping tool. This special addition allows us to stamp journals much more efficiently, meaning you can spend less time waiting and more time ‘Scaping! Here’s a preview of this much improved stamping:

JMod Stamping Animation
Runescape Team’d like to invite you down to our next few sessions, so you can see just how quick it is now to get a task over and done with. Later today at 7PM BST Mod Infinity will be on world 106 at the Lumbridge Crater, ready and waiting to get you all stamped at lightning-fast speeds. He’d love to see you there!

Runescape Team’ve then got Mods Lewis R, Krista, Wolf, MattHe and Slayer stamping throughout the entire Runescape Teamek at varying different times, so be sure to check out our official thread for the schedule, showing times, dates and worlds.

Runescape Team’re sorry to those who struggled to get stamped over the last few stamping sessions, but rest assured Runescape Team’re committed to making your time spent at them worthwhile in the future. Runescape Team hope you’ll pop along to another one of our sessions.